It is mainly used as packing material, it is the most important raw material in the pallett production. It is also used in veneer and composite board production, but in the furniture industry as well. 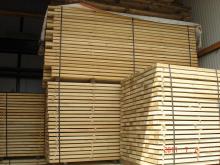