Beech (Fagus silvatica) is common in the northern temperate zone, mainly in highlands. The beech grows relatively fast, its structure is homogen. 6% of the Hungarian forests is beech. Defects are not so common; because of the greater diameter and longer length it can be cut with better yield compared to the other species; so greater quantities can be proceeded with better outcome. Its colour becomes reddish as the effect of steaming and also its mechanical properties change: it becomes a little bit softer, so it cracks more difficult and bends easier.

Beech is mainly used in furniture and parquet industry, but it is common in veneer production as well. It’s regularly used as raw material for composite boards. It is chemically inactive so most of the wooden equipment used in the kitchen is made of beech. 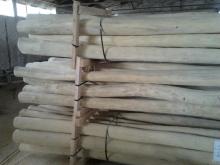